Since 1991 the Universität Würzburg hosts the Physikalisch Vulkanologisches Labor (PVL). In this physics-lab experimental methods are used to investigate eruption physics and properties of magma.

Physical volcanology deals with processes and mechanisms of volcanoes, their emplacement, eruptions, and deposition of volcanic products.

Rocks representing the magma sampled about 700 m below the sea level was molten in an induction furnace. This melt then was used for fragmentation experiments to measure the critical parameters needed to explain explosive behavior. The experimental particles can be compared to natural products the deposits produced by this eruption.

Jets of volcanic ash produced within a 60x60 cm large water-filled tank: with (left picture) and without pumice particles (right picture). Aim was to observe the emplacement of high velocity plumes in a water body.

After 2 years of operation under the harsh climate of Central Iceland the stations for detecting electrostatic field fluctuations were checked and overhauled. All is set for the next explosive eruption to come (Picture: e-station Katla volcano). June to August 2015: Experimental investigations on the gasrich Eruption of the  Bárðarbunga volcanic system (Iceland, 2014/2015)

Why was this largest eruption since Laki 1783 not explosive, but extremely mild effusive? Also in laboratory experiments no explosions could be observed – in contrast to comparative experiments using material from Laki. Probably not only environmental factors lead to the mild behavior of Bárðarbunga 2014/15 but properties of the magma itself.

3 gas-impulse canons, installed on a hill south of the campus area, were used to experimentally generate volcanic ash-plumes. The ash was imported from Iceland and comes from samples taken from the 2010 eruption of Eyjafjallajökull volcano. The experiments were performed to test and calibrate the new instruments for monitoring the Icelandic volcanoes in the frame of the EU-project FUTUREVOLC and to ensure that in the case of new eruptions the air-traffic will be shut down only if it is really necessary.   About 20 volcanologists, predominantly from partner institutions of the EU-project were participating with these benchmark experiments. 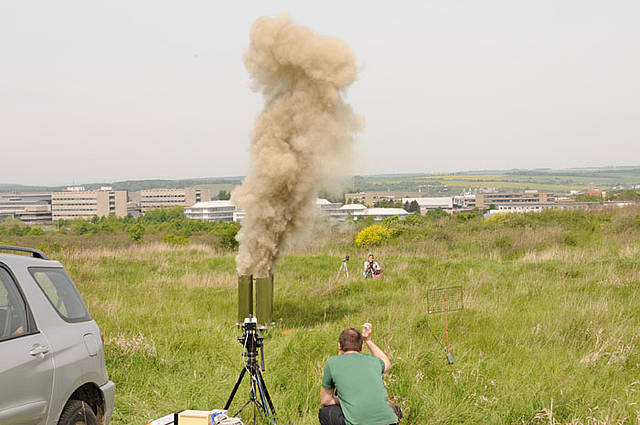 December 2013: Measurements at the “Strokkur” geyser

Eruptions of the geyser were monitored by highspeed- and infrared cameras in combination with seismic and electric sensors, using the “water volcano” to test systems for volcanic eruption monitoring – done in cooperation with the University of Iceland’s Institute of Earth Sciences. Three fixed stations for electrical field measurements have been installed at Grimsfjall (Grimsvötn), at Feðgar (Hekla), and at Slysaalda (Katla). An additional mobile station is ready for operation if an eruption should occur. Aim of the European resarch project ist the installation of an advanced monitoring system fort he Icelandic volcanoes Hekla, Katla, Grimsvötn, and Eyjafallajökull. A better data-base must be available for the decisions of the European air traffic authorities. The first new sensors have now been deployed and PVL’s contributions are specially designed electrical sensors. May 2013: Man-made Maar-craters in Buffalo

Ongoing cooperation with "Center for GeoHazards Studies" (State University of New York at Buffalo): Experimental formation of maar volcanoes is investigated by repeated blast cratering within an artificial host-rock pad. In addition, the Würzburg group used the experiments to test the electrical sensor systems developed for monitoring of the Iceland volcanoes in the frame of the European research project Futurevolc. Researchers from the PVL took part at a series of blast experiments, conducted by the "Center for GeoHazards Studies" (University of Buffalo) in order to analyze diatreme-forming processes on a large scale. May, 2012: New experimental series produce diatremes in a sandbox

In cooperation with guest scientists from University of Otago (Dunedin, New Zealand) experimental runs were performed in order to study the structural evolution of diatremes caused by maar-like eruptions. In cooperation with the crew of Prof. Magnús Guðmundsson (University of Iceland) eruption sites of Grímsvötn and Eyjafjallajökull were analyzed. Another series of large-scale experiments were performed in cooperation with Dipartimento Geomineralogico of Bari University. Public interest in our laboratory has increased drastically in the last months. Several Science magazines and reports of federal TV broadcasting stations distributed information on this labs various activities. Among others the lab was represented in the following magazines:

Cooperation with Dipartimento Geomineralogico of Bari University (Puglia) resulted this year in another series of experiments.
Examples:

Second Round of Experiments in Southern Italy

The joint operation with Dipartimento Geomineralogico of Bari University (Puglia) finished its second experimental series. This time a strongly stressed point of research were behavior differences due to different ash temperatures.
Some snapshots:

Workshop on subaqueous and subglacial Volcanism

Participants from Iceland, Scotland, and Flagstaff (and sure from Germany) meet at the PVL.
The first have already been spotted

Read more about it at the University Press release

Large scale experiment:
Up to 250 kg of volcanic ash are pushed into the atmosphere under controlled conditions to investigate volcanic plumes and pyroclastic density currents.

More details about this at the University press release .